One of the factors that makes coffee so exciting to us is the incredible amount of diversity and variety there is in how you consume it. Even more than what’s in the cup, how that cup is made, how that coffee bean is prepared, and even where it comes from all play an important role in determining exactly what that delicious mug is going to taste like when you put it to your lips. However, this complexity can be just as intimidating as it can be interesting. 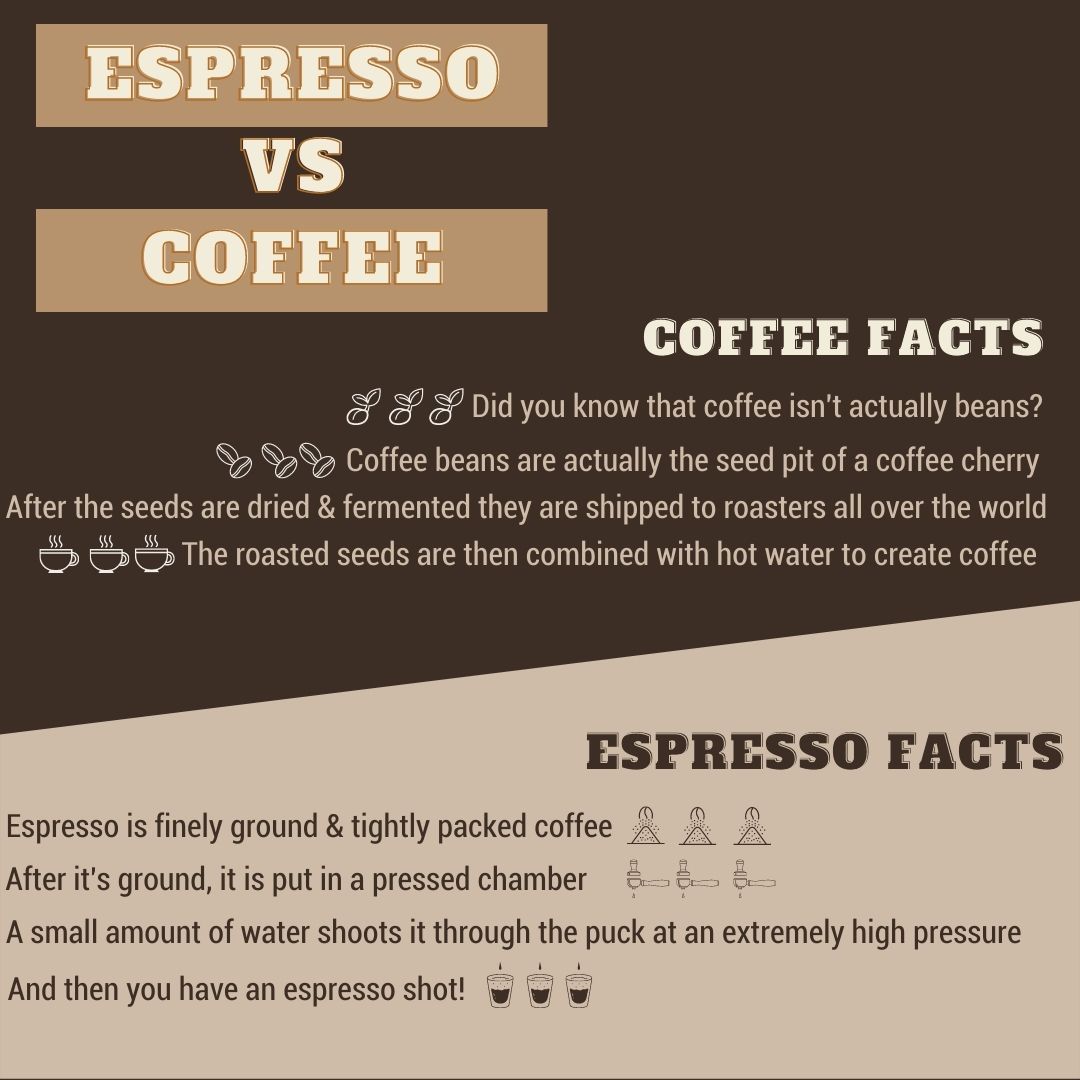 What is it that makes coffee one thing, but espresso another? Why do some drinks come from a typical coffee pot while others need a fancy machine? How do we decipher the laundry list of items on your average coffee shop menu board without feeling like you need to speak another language? These are questions we’ve all felt on our journey to understanding this beautiful drink, and we know we’re not alone.

No one should have to worry about whether they’re getting exactly what they want in their morning joe. Whether you're in line at the cafe or you’re just looking to expand your knowledge of the bold and beautiful beverage you fix yourself every morning, consider these quick facts when deciding what to order on the key differences between coffee and espresso.

Obviously, this is the most important question of all but it’s also the one we think we know best. But how much do we really know about it?

For instance, did you know that coffee beans are not actually beans at all? The bean we’re familiar with is actually the seed pit of a coffee cherry, a fruit. These cherries are harvested from coffee plants which typically grow in places of high elevation, volcanic soil, tropical climates, and many other necessary conditions. These coffee seeds are removed from the cherry and the pit using a variety of different methods before being dried and fermented, and sometimes washed, at which point they are considered “green coffee”.

This green coffee is then shipped around the world to roasters, who convert these green beans into the brown ones we are much more familiar with through the process of roasting. This involves exposing the beans to a persistent, low heat while keeping them in constant motion so as not to burn them. The roasting allows us to extract the maximum flavor from the coffee while also making them easier to make coffee with. At this point, they're ready to brew!

Brewing coffee is the process of extracting the soluble components of the beans into hot water. There are many different methods of doing so, including french press, drip coffee, siphon, Aeropress, Moka pot, pour-over, cold brew, and so much more. Ultimately though, each of these is still considered simply “coffee” even though their flavors can often be quite distinct. 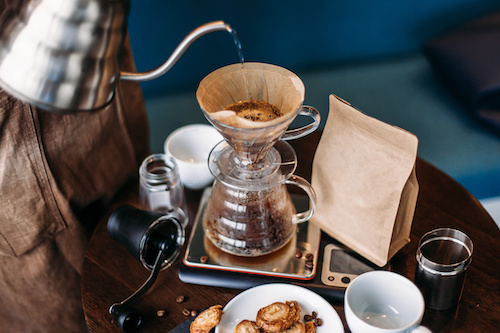 You’ll often find that in a coffee shop, these drinks will simply be called ‘Coffee’, ‘Black Coffee’, ‘Iced Coffee’, ‘Drip Coffee’ and ‘Batch Coffee’, and there likely won’t be too many options for this unless you find yourself at a specialty shop that offers something more unique like pour-over. The reason for this is twofold: first, coffee shops don’t often have the resources to make this kind of drink repeatedly for every customer. They take a long time and see a much smaller return, so coffee shops tend to make one really large batch of this kind of coffee drink and serve it that way. Secondly, many coffee shops find the popularity of regular coffee to be dwarfed by another kind of caffeine fix that makes up an even larger part of their menu called espresso.

We promise that this is not a trick, but the answer is actually... also coffee! That’s right, espresso is simply one of the many different categories of coffee-making that exist. There’s nothing special about it that necessarily makes it distinct from regular coffee other than the method of preparation.

The essence of espresso is a finely ground, tightly packed puck of coffee that is pressed into a small filter chamber. This chamber is then inserted into a machine, an espresso machine, which subsequently boils a small amount of water and shoots it through the puck at an extremely high pressure. Then, out flows a very small amount of highly concentrated coffee liquid called an espresso shot. 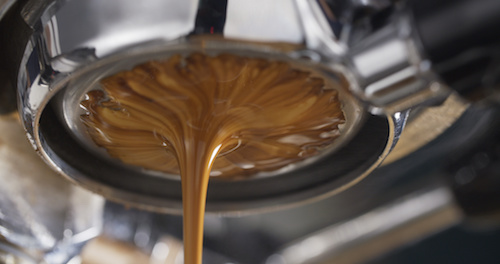 An espresso shot is characterized by its strong body and flavor, thick texture, and foamy top called Crema, a byproduct of the pressure used to brew the drink that is formed from the large quantities of CO2 leaving the coffee during brewing. While the espresso shot is often enjoyed by itself as a single shot or even a double shot, it is by no means the most common method of doing so given its distinctly powerful taste.

Often at your local cafe or coffee shop you’ll find the espresso drinks you’re more accustomed to under many different names. While there are many variations, typically each will entail a different combination of espresso, cream, and water. These include a few such as:

Cafe Latte - The classic you know and love as simply the Latte. It’s made of one-third espresso, two-thirds hot milk, and a thin topping of micro-foam. Very commonly mixed with flavored syrups like caramel, vanilla, or specialties like lavender.

Cappuccino - Very similar to the Latte but a little more balanced. One-third espresso, one-third hot milk, and one-third milk foam often with another flavor like chocolate or cinnamon.

Mocha - Basically the same recipe as the Latte, but this one starts with a small amount of cacao or chocolate syrup in the glass.

Cortado - Equal amounts of espresso and steamed milk, but not as foamy as other drinks.

Americano - Espresso brewed directly over hot water for a bold drink much like regular coffee.

Macchiato - Espresso with a very small amount of steamed milk or foam. The word is actually Italian for “stained” describing the touch of milk on top of the coffee.

Red Eye - Black coffee with a shot of espresso poured in. Not for the faint of heart.

While not essential to the process, often you’ll find coffee beans that are sold as “espresso” are slightly different than your average coffee bean too. While not necessary for espresso brewing, these kinds of beans are sometimes roasted slower and at a higher temperature for a deeper, darker flavor that really intensifies through the espresso brewing process. However, normal roast coffees and even light roast coffees are known to make just as tasty shots too, depending on your taste!

Another frequently spread myth surrounding the two is that espresso has a much higher caffeine content than its weaker counterpart. This is also untrue! In fact, when comparing two similar serving sizes (an ounce of espresso, or a shot, and 8-10 ounces of drip coffee, a mug), the drip coffee actually has slightly more overall caffeine! However, espresso obviously does have a higher caffeine by volume which is why such a small amount packs almost as much punch as the larger mug. So don’t go drinking a whole cup of coffee’s worth of espresso anytime soon.

We hope this helps clear up any mystery associated with all of these delicious concoctions that make up this wonderful world of flavor. There’s no secret sauce or hidden tricks to what makes these drinks so scrumptious, it’s all just a matter of hot water passing through ground beans before being mixed in with other delicious ingredients. We firmly believe that the best cup of coffee out there is the one you like to drink, so we’re always working tirelessly to remove the barriers between you and that perfect cup.

Exploring all of the different flavors of coffee is our passion, and we guess you could say that we’re a little obsessed. Follow us on Instagram to keep up with our journey to understanding everything coffee has to offer and to try out all of the different recipes we’re constantly unveiling for you to explore too. We can’t wait to see what interesting paths coffee will take in the future and we look forward to sharing it with you!